Back in the US of A!

We left Victoria, British Columbia on a ferry only to land smack in the middle of vampire country.  Welcome to Olympic National Park!  I did not like dem woods.

It was only when I crossed the vampire treaty line and arrived on the coast at La Push, WA that I let my guard down a little.

That is, until a “test” tsunami warning blared over the loudspeakers.  From then on I kept one eye on the ocean and one eye on the woods at all times.

And then, in the middle of nowhere with who knows what lurking about, my humans locked us out of the trailer.  The moon was full and there wasn’t a locksmith for miles.  It took me about 20 jittery minutes to jimmy a window and crawl inside.  My nerves with my humans!  But hey, they do all the driving, shopping, cooking, cleaning and setting up so I can’t complain too much.  They also know how to build a great fire to keep the critters away!

We continued south to Copalis Beach, WA where you can drive for miles on a very wide flat beach.  We took the truck onto the sand for a test drive and since it was so easy we decided to try this further south on the 26 mile Long Beach Peninsula with the trailer hitched up.  Camping right on the beach… sounds great, right?  People have been driving on this beach since the automobile arrived in the west.  So we followed all the other cars to the beach access, but when we arrived at the shore it was high tide and there was nothing but soft sand.  Everybody else just turned around, but we couldn’t with our 45 feet of rig.  So we backed up for a 1/2 mile!  Let me just say this was not the highlight of the trip and all pictures have been destroyed.

We were so happy to arrive in Oregon.  I have longed to see this stretch of coast, and we did, all 363 miles of it.  People actually bike the twisty 101, lugging all their camping gear and stopping overnight in the 48 or so beautiful State Parks along the way.  Watching them struggle their way up the many Capes with vertical climbs of 500 to a 1000 feet made me so glad to be zipping along in the silver bubble.

We first stopped in Cannon Beach where we learned to appreciate that beast called “the fog”.  So in that spirit I am dedicating this post to fuzzy landscapes.

Luckily we still had lots of beautiful sunsets!  It was here that I discovered the joys of grubbing for sea food.  Much better pickings than the left over bits of marshmallows I was finding in the woods.  I’m not sure why my humans put a stop to this, I thought dead crabs are good for you? 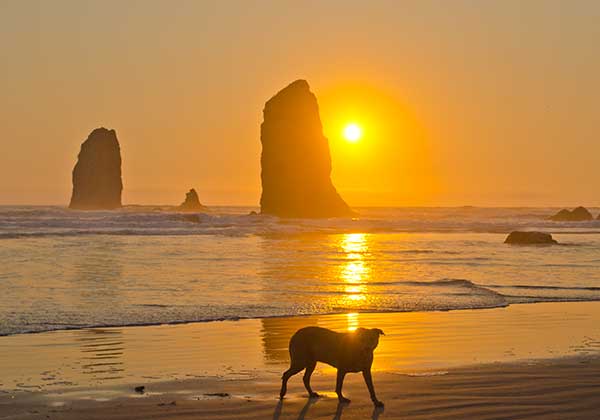 Next we took a little detour inland to a very warm and sunny Portland to visit some dear friends.  What a great city!  A big shout out to Ruth and Debbie who lovingly showed us their wonderful town.

This is me in a little Zip car Debbie rented. We had a blast!

Back to the coast, and the fog!  We hunkered down at the Sea and Sand RV park in Depoe Bay for 3 days until it broke.  But when it did…WOW! 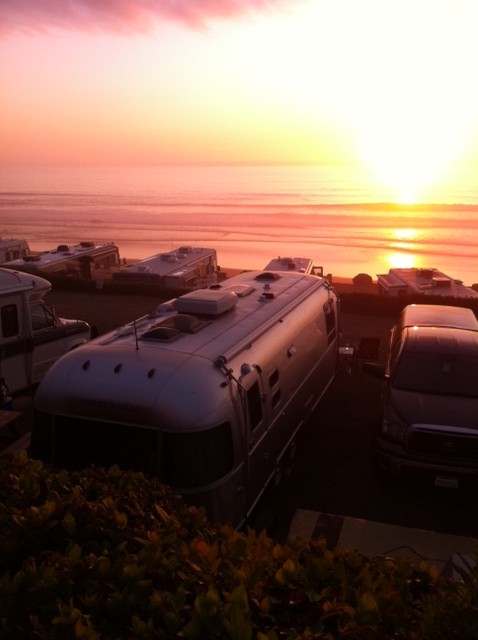 The further south you go the less developed it becomes.  It’s a wild coast, full of rocky sea stacks and crashing surf.  Below is lovely Gold Beach. 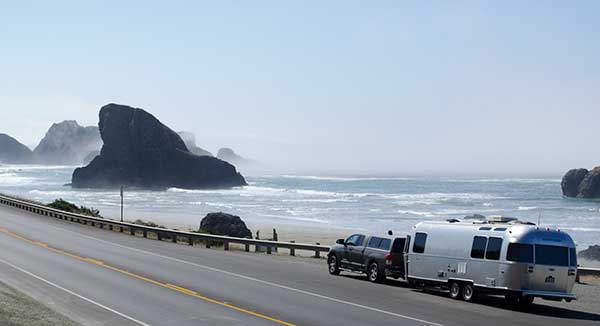 And we loved this long stretch of Samuel H Boardman State Park.

But as much as we liked the Oregon Coast, the best was yet to come.

Coming up next:  California Dreaming!