© 2012 Richard Broadwell – One and Only Palmilla Resort

Wondering where I’ve been?  Don’t worry, I didn’t get kidnapped in Mexico!

You haven’t heard from me because I’ve been having too much fun.  Margaritas and fish tacos, mucho mas margaritas and tacos!

And don’t forgot the martinis at Nikki Beach in Cabo San Lucas. Yum! 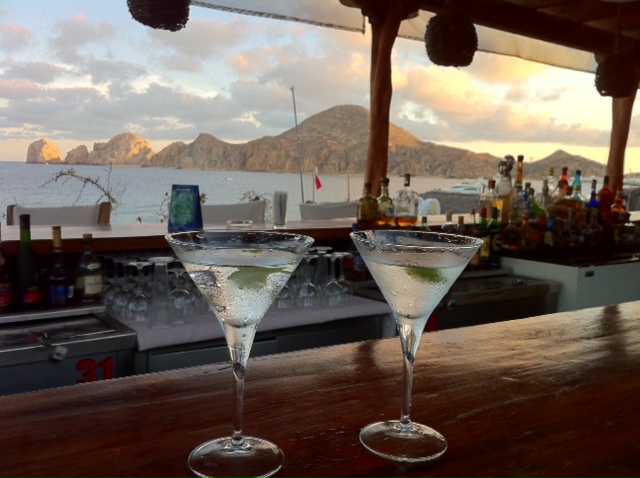 But what kept me really busy was driving a 1000 miles down the Baja in a RV Caravan.  It was perfect for the wary first timer though safety wise, it’s not necessary.

Not that I wouldn’t do it again, Becky and John Smith who own Baja Winters Travel Club were the bomb!  They offer various tours, we did the “Hammer-Down and South-Bound” where they escort you down the Baja, then drop you off for 2 months, then get you back safely.  It was perfect for us. 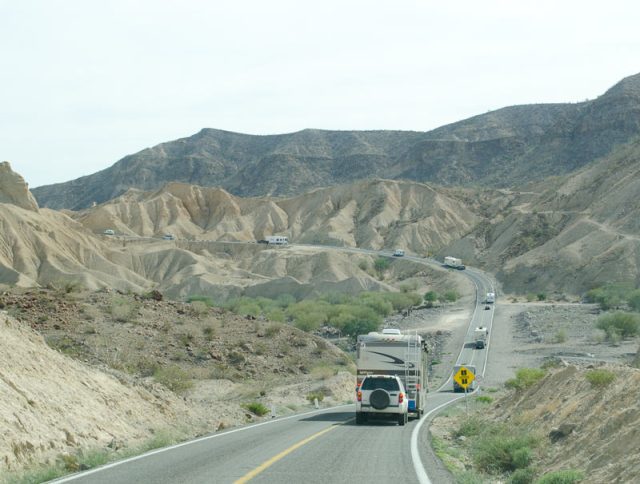 The road is definitely a challenge.  It’s 10 foot width and lack of shoulders make it a white knuckle drive fosho.  And then there were the 18 wheelers, the buses on a schedule, and the livestock wondering around.  I had to pry my fingers off the steering wheel at the end of the day, but it was worth it.

There were a couple of breakdowns and some mirrors were lost.  But our Wagon Masters were able to deal with any unexpected surprises with calm and expert knowledge. 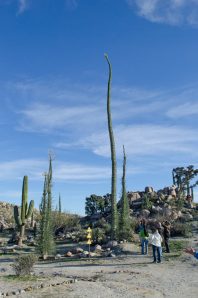 The best part of going with a caravan was the great friends I met.  I want to give a big shout out to my besties Hurley and Jemma (and their humans too!).

I met so many other great friends, too many to name; Sarah, Chet, Bella, Briana, Mindi… but they all know who they are!

Here we all are boondocking at Santispec Beach near Mulege.

But the very best thing about Mexico… I’m allowed to run free on the beach!  What a civilized country! 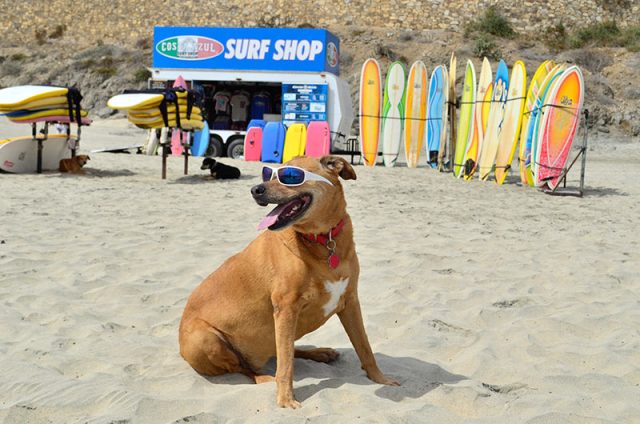 The water activities were endless; surfing, kayaking, paddle boarding, snorkeling, and kite surfing.  You never knew what you’d find in the water! 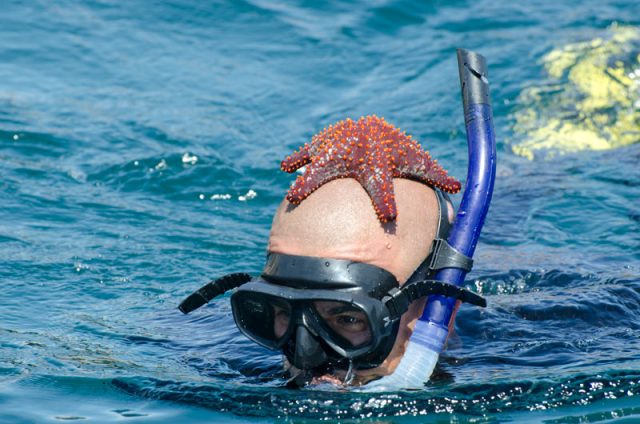 The other thing I loved about Mexico, the people!  They’re so resourceful and hard working, with a real “can do” attitude.  MexiCAN! The entire experience was a total pleasure.

And the whales!  They were everywhere, jumping right out of the water wherever we went. In Guerrero Negro I got to see where the Mama whales birth their babies.

And boy were they yummy! 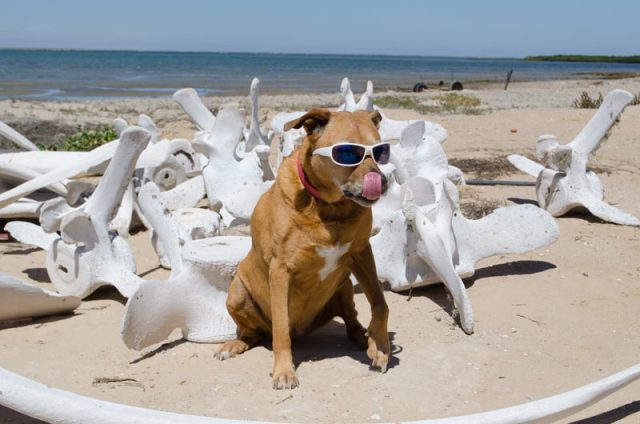 Now before you have a fit you know I can’t resist grubbing for seafood!  Just kidding.  A big shout out to Carlos at Bahia Magdalena for rolling out the red carpet for us.

In Cabo San Lucas we stayed for a month at Vagabundoes Del Mar Trailer Park.  Muchas gracias to Doug and Kathy for their wonderful hospitality, and for helping us get in and out of our spot, twice.  We loved being under a palapa with our own outdoor kitchen, covered parking and great neighbors.  Another big thanks to Noel for the great golf at Costa Del Sol. 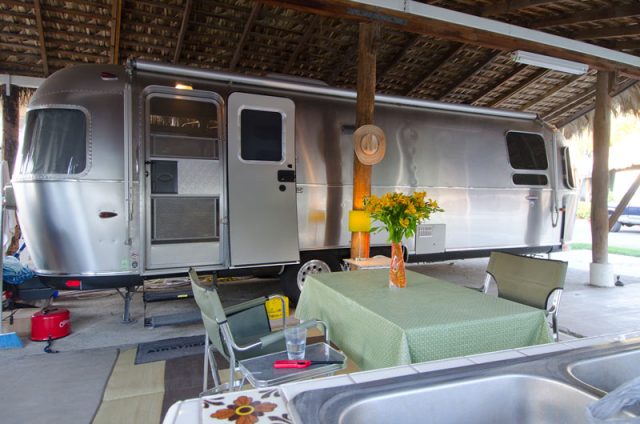 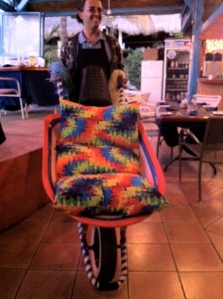 The restaurant at Vagabundos also had the best margaritas in town.  And in case you had too many, here’s your ride home.

Cabo has lots to offer with it’s beautiful beaches, fun restaurants and great fishing.  Sunset Da Mona Lisa Restaurant was one of our favorites.

And the El Farallon Restaurant at Capella Pedregal also.  This is how you order your dinner!

And of course our all time favorite, the Esperanza resort.

Once we left Cabo I had a couple of brushes with fame.  First I agreed to be in a Sears Mexico commercial.  Our incredibly resourceful production hombre, Aleph Alighieri, hinted the commercial was going to be all about me and my glamping.  But somehow only the Airstream made it into the final cut.  My nerves!

We loved Los Cerritos with it’s laid back surfing vibe.

A great place for sunset cocktails and whale watching was Hacienda Cerritos, a gorgeous boutique hotel on a cliff overlooking the Pacific.

I was so excited to see Hotel California, in the wonderful town of Todos Santos, and was determined to get to the bottom of the urban legend that the Eagles had stayed in the hotel while writing their famous song of the same name.

After one minute of googling while using the wifi in their bar, I was able to ascertain that this myth is false!  But the drinks were great and it was… a lovely place. 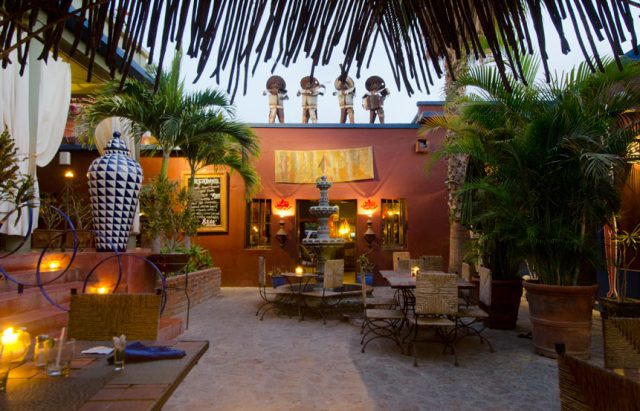 But I saved the best for last.  My favorite spot of the entire trip was Playa El Tecolote, near La Paz.

Here we spent 10 amazing days and felt like we were part of the community thanks to the wonderful Mexicans and Gringos that live and work nearby.

A big gracias to Manuel, Gary, Francoise, James and the whole gang at Palapa Azul!

I also met some new friends, Ruff (who has since sadly passed, RIP Ruff), and Inca from Santa Fe, NM and their wonderful humans who are fellow Airstreamers!

I followed my bliss at Tecolote Beach. 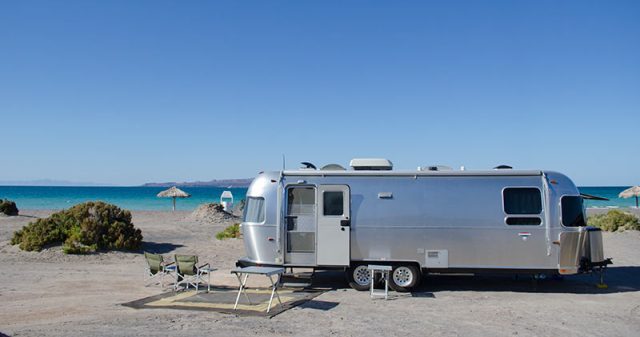 At Playa Tecolote we booked a boat tour from my main hombre Manual at Marlin Adventures to the beautiful Isla Espiritu Santo, where we saw some incredible sights.

Including the famous Blue Footed Booby! 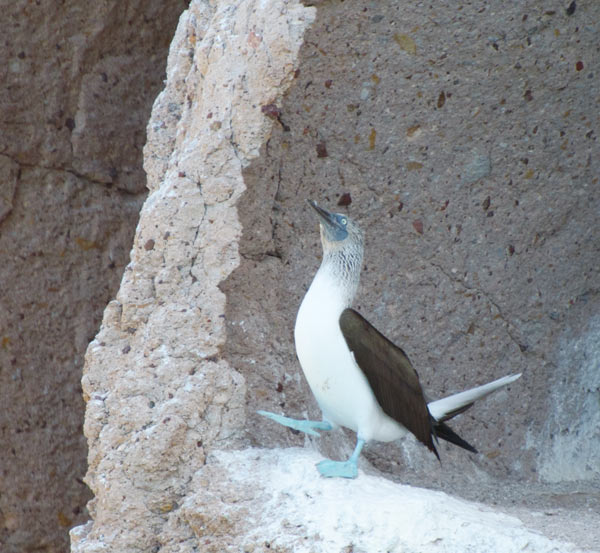 Nearby Balandra Bay is beautiful but please remember to shuffle your feet because of stingrays.  Manuel has his hands full taking care of tourists who don’t shuffle! 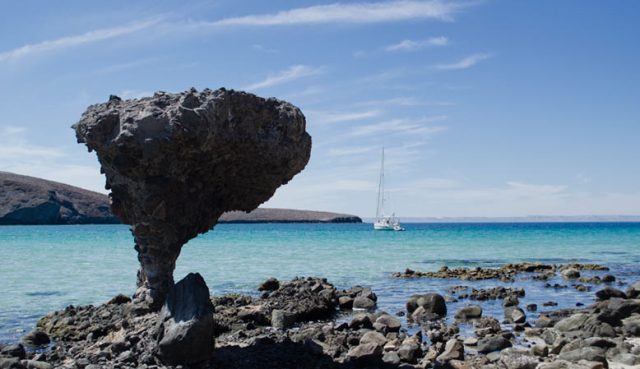 This was my favorite bar and hangout, Palapa Azul.  To all our buddies we met there, we miss you so much! 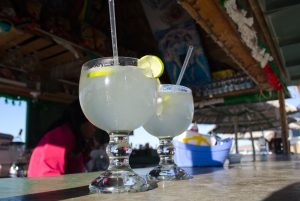 Their margaritas were killer.  The secret ingredients; fresh lime juice, tequila, and Damiana.

Damiana is a herbal based liqueur grown in Baja.  It has an ancient reputation that goes back to the Mayans.  And I know why, it makes you crazy!  In a good way.

As you can see I wasn’t happy that we had to leave my favorite place or all of Baja for that matter! 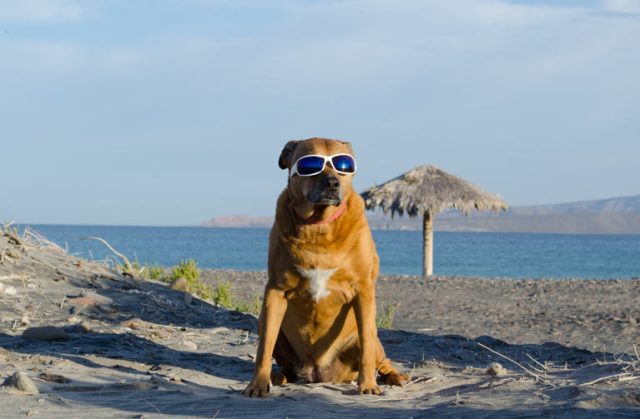 I vow to return, by hook or by crook!

Coming up next: Florida, Here We Come!